Baccarat, Cristalleries de. This is a very old glass house, having begun in 1765 near Luneville, Nancy, France. From 1823 most of its production was lead crystal. They also invented opaline glass. From 1846 they produced wonderful millefiori paperweights. Between 1832 and 1857 they worked closely with Saint-Louis. They still produce glassware for French embassies decorated with the embassies own special patterns, and provide a table service to heads of state. They famously produced chandeliers and large ornamental vases in ormolu frames. Today they produce great glass, including table-settings, jewellery and vases. See marks.

back painting. Painting on the back of glass, for example on mirrors or inside snuff bottles.

Bagley & Co Ltd. A glass company in England which lasted just over one hundred years (1871-1975). From 1912 it is famous for its pressed glass and lead glass. It had some classic Art Deco designs including one with black glass covered with polka dots. See mark.

Bakalowits. Bakalowits was a glass retail shop in Vienna. It opened in 1845 and closed at the start of 1914. They commissioned glass from Loetz, and designs from famous designers such as Josef Maria Olbrich and Kolo Moser. Sometimes these iridescent pieces were set in metal mounts. In 1906, Bakalowits commissioned glasses designed by Otto Prutscher. These are elegant clear cased glasses, which have been cut back in geometric facets on the stem and the bowl.

baluster. Applies to a glass with a baluster stem, see drinking glasses.

Barbe, Jules. Jules Barbe is one of the most sought after gilders and enamellers. Barbe was born in Paris and studied there as a decorative artist. He came to work for Webb in Stourbridge in England in 1879. He left in 1901 and became a freelance decorator. He then produced many designs for Stuart. He produced very fine gilded ornamentation in an oriental style and fine enamelled ware. He decorated Queen's Burmese Ware with delicate, colourful and detailed flowers. Perhaps the most desirable glassware are his painted lizards on applied glass and handles. A magnificent decorator.

Barbini. Alfredo Barbini was apprenticed to Ferre Toso in 1925, and at the age of eighteen he was a maestro at Cristalleria Murano in 1930. Two years later he was at Zecchin-Martinuzzo, and later he worked with Flavio Poli at Seguso. After the Second World War, Alfredo worked with Martinuzzi again and then with Vistosi and Cenedese. Eventually in 1950 he established his own factory called Vetreria Alfredo Barbini. He is known for his chunky pieces of glass, with encased lumps of coloured glass, and simple solid designs of fish, Vasi Pesanti. He also did a tulip vase called Tulipano, with a subtle internal vertical stripe of colour within the glass forming the stem and the bowl forming the flower of the tulip. Flavio, Alfredo's son, has designed for the company since 1968, and introduced brightly coloured plates made with fused canes of glass. The company has also done clear glass tableware. Today Leonardo Moretti also designs for the company, who is Alfredo's grandson. The company is a family business.

Barolac. This was a trade name for a pressed glass range, made in Czechoslovakia between 1930 and 1945. The designs are reminiscent of Lalique and Jobling, and included opalescent vases and bowls. Often the mould lines are quite pronounced. The same designs were produced again in the 1970's. Made by Josef Inwald.

Barovier and Toso. There has been a glasshouse with a variety of names on the lines of Barovier in Murano since 1883, and then later Barovier and Toso from 1936. During the 1940's particular note should be taken of the art glass that was produced there. Barovier and Toso works today. It produces chandeliers and art glass.

base ring. Applied ring of glass to the base of a glass bowl or vessel.

Beilby glassware. English glass decorators in the late 1700's. Usually white (or slightly pink or blue) enamel in heraldic designs. Later there were themes of flowers, rococo and classical ruins with birds or butterflies. Sometimes they used coloured enamels. They decorated glasses and decanters.

Berluze. A vase with a bulbous base and a very long and very thin neck. Developed by Daum in coloured glass to be bulb and stem like, there were a number of variations on this organic theme. This is a classic and desirable shape with forms by several makers including Daum, Delatte, Legras, Noverdy and Muller. This term is sometimes rather loosely used for all soli fleur forms.

Biedermeier. Usually a term used to describe furniture but it was also used to describe ceramics and glass. The term comes from the characters (Biedermann and Bummelmeier) in a cartoon in the 19th Century. When referring to glass, it generally describes heavily cut, enamelled and gilded Bohemian glass.

Bimini Werkstatte. This was a glasshouse in Vienna set-up by Lampl operating between 1923-1938. They produced very delicate lampworked articles. For instance, glasses where the stems are in the form of female dancers or leaping deer. They are totally impractical, but of beautiful form. Venini apparently made some during a similar but shorter timeframe 1925-1930. Other forms were possibly made in the Czechoslovakia. In 1938 Lampl left Austria and restarted Bimini in London which also operated during the war years making buttons under the Orplid name.

black glass. Black glass is formed by the introduction of Manganese and Iron oxides. Some glass appears black if there is an intentional excess of any colouring agent. see also coloured glass.

blank. A simple form or shape of glass before decorating or carving.

Blenko Glass company. A US company, founded in 1922 by William J Blenko from the UK. It began making stained glass, and then decorative items, such as fish and animals.

Block. A shaped wooden tool used to form the molten glass into a regular or repeated shape.

bloom. A slightly opaque appearance on the surface of some old glass. This is caused by the processing of the glass. It may be too alkali in the furnace, or there may be too many sulphur fumes. Also this type of surface deterioration can be seen where gilding has worn off.

blower. The worker that blows through the blowpipe to expand the glass freestyle or into a mould.

blow-pipe. A hollow iron or steel pipe which has a mouthpiece on one end and the gather of glass on the other. This is used to blow the glass.

Bohemia. An area of famous glass making factories. The area includes the Czech Republic, Silesia (in Poland), Austria and Bavaria (in Germany). The style of Bohemian glass is often strongly cut and engraved, sometimes through cased or flashed glass. Glass houses included are Loetz, Lobmeyr, Harrach and Kralik. Glass has been made in Bohemia since the 6th Century AD.

Bolton & Sons, Edward. From the 1860's throughout the rest on the 19th Century, this company produced pressed glass. It was based in Warrington in the UK.

Bottle. Normally a vessel for holding liquid. There is a great interest in bottles.

Bowl. Either a large concave vessel (wider than it is deep) or the part of a drinking glass which holds the liquid. See the special section on drinking glasses.

Brierley glassware. Originally known as Stevens and Williams, Brierley became the new name in the 1930's, and with a Royal Warrant it became Royal Brierley. It produced cut glass crystal table ware and vases, sometimes with geometric designs, and sometimes with more flowing floral motifs. Keith Murray worked there between 1934 and 1939. Although it concentrated on crystal production it produced glass in a wide variety of styles. (see Stevens and Williams).

Brilliant Style. A type of cut glass decoration, with deep polished cutting in order to encourage lots of reflected light and make the glassware sparkle. It was especially popular in the USA, 1876-1915.

Bristol Blue glass. Used to describe old dark blue glass, although not all of it was made in Bristol, England. It was associated with the city due to the large number of glasshouses there and the fact cobalt (used to achieve the blue) was also imported through Bristol. Today there is a company based in Bristol, called the Bristol Blue Glass Company which specialises in this blue glass, with both old and contemporary designs. Ranges of glass in the Bristol Blue style have been produced during the 20th century by a number of manufacturers, notably Dartington, Thomas Webb and Nazeing.

Brocard, Philippe-Joseph. In the late 1800's, Brocard produced historic and Islamic gilt glass. Brocard was originally an antique restorer and Islamic lamps influenced his style of decoration which covered almost the entire surface of the glass. Along with gilt, there were many different coloured enamels. Later his designs became simpler and included the cross of Lorraine and floral motifs.

Broncit glassware. This was produced by Lobmeyr and designed by Josef Hoffmann. It featured around 1910, and consists of an intricate design in black pigment on either a clear or matt glass surface. Glasses and bowls were decorated in this way.

Bronze glass. This is an iridescent glass made by Webb. It was exhibited in Paris in 1878, and there was a dispute with Richardsons on the iridescent patent. Richardson continued making it's own iridescent glass, despite saying that it would stop. Webbs bronze was referred to as Green Bronze in their pattern books, so it has been suggested that the body of the glass is green. Sometimes the vases had applied handles, snakes and lizards, lion masks, trails, plus etched decoration, hieroglyphics and gilding.

bruise. A blemish on the surface of the glass, caused by coming into contact with a hard object. The blemish can show minute cracks in the local area of the contact, and tiny pieces of glass may break away leaving a hole on the normally smooth surface of the glass.

bubble. A cavity within the glass body. Bubbles may be random or regularly positioned to great decorative effect. Bubbles are sometimes used as air twists in the stems of glasses to create a decoration in the stem. This is different to the latticino effect where white threads of glass are twisted within a clear body to create a lattice.

Bull's-eye pane. The centre part of a piece of crown glass.

Burgun, Schverer & Cie. This was founded in 1711 in Alsace-Lorraine, France. It produced glass for Galle from 1885, to his design and under contract. The decoration was carried out by Desire Christian. The contract ended in 1896. It then produced cameo and painted vases with abstract designs. Sometimes trapped foil was introduced between the layers of glass. They produced a series of decorated vases based on drawings by Walter Crane. Christian and Burgen left in 1903 and the art glass ended. It then produced table ware and closed in 1969.

Burtles, Tate and Company. Produced pressed glass in the late 19th Century until 1924. It was based in Manchester, in England. It produced and registered designs similar in style to Sowerby, although not as prolific, it produced some interesting novelties.

Button. It is both a decoration and a method of attachment.

(1) A blob of molten glass placed between the blow-pipe and the piece to ensure a good joint between them.

(2) A small glass blob, sometimes stamped out used as a decorative application. 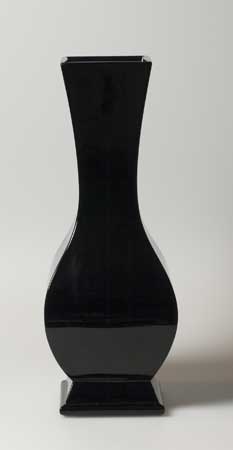 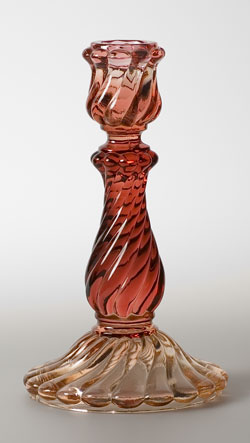 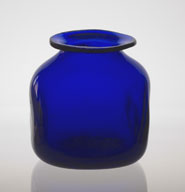 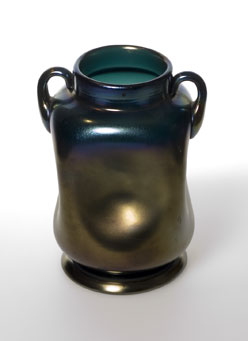 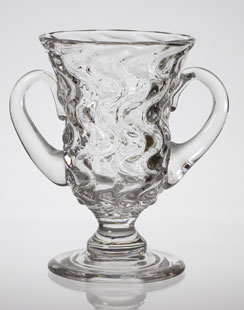 A pressed glass Baccarat vase in red and clear. Made in this form during the early 20th century.