Edinburgh Crystal Glass Company. It made high quality cut glass, tableware and gifts. In the 1970's it was grouped with Webb. Some glass production is subcontracted to Eastern Europe.

Edkins, Michael. Edkins was initially thought to be a delft ware and glass decorator from Bristol who worked around 1762. It seems more probably that he managed sourcing and the retail of the items. He is associated with mainly painted opaque white glass and blue glass. Also gilded items. The associated decoration was mainly floral, birds, insects and oriental themes.

Egermann, Friedrich. Egermann (1777-1864) was one of the most famous Bohemian glass decorators. He perfected the use of red and yellow staining which could be brushed onto the surface of the glass. He used it to imitate precious stone, and this was called Lithyalin. Egermann was the only maker of red staining and it was to his own secret recipe. In a break-in the recipe was stolen and sold to Saint-Louis and then it was used all across the world.

Eiff, Wilhelm von. A designer and engraver working during the first half of the 20th century. Worked for WMF and probably consulted and deisgned for a number of glass houses.

Eisch. Eisch began an engraving business in the early 20th Century, and eventually during the 1950's a furnace was acquired. One of the sons Erwin went on to became a well known studio glass designer. Much of his work is sculptural, and free blown, such as his melting telephones in the 1970's. They also produce tableware. They are based in Bavaria. They produce limited editions every year by Erwin or guest designers.

enamel. A suspension of metal oxides which could be applied to cold glass with a brush to create a decoration. The glass would then be reheated so that the enamel fused to the surface of the glass. This is different to cold enamelling.

End of day glass. Glass produced with the remnants of the glass in the furnaces. End of day glass was used to made friggers in many colours, with whatever was left over.

engraved glass. Glass which has been decorated by the use of a sharp or pointed, diamond, steel or rotating wheel cutting through the surface of the glass. This is best on lead glass which is harder and has a greater reflective quality.

Escalier de Cristal. This glassworks decorated glassware and glass furniture in Paris in the early 19th Century. Also produced ceramics and styles not unlike those in glass. It was founded by Charpentier. Later it was to sell metal mounted ornaments and tables. Production can be quite unusual.

(1) Etched glass is decorated by a diamond point scratching the surface of a glass.

(2) The use of Hydroflouric Acid which etches into the surface of a glass. The pattern on the surface is created by painting on a wax resist to the surface first, and this area is untouched by the acid. The length of time the glass is in the acid determines the depth of the etching.

Etling. Etling was a outlet in Paris, which commissioned bronzes, sculptures and glassware. Most of the Chiparus statues were made by Etling. Etling is well known for its opalescent frosted glass similar to Lalique. There are some very well designed items amongst the range produced. Etling operated from the 1920's until the 1940's. Some Etling was reproduced by Sevres in the 1970's.

Etruscan glass. This was a style of glass, decorated in a way which emulated ancient Etruscan pottery. It was made by Richardson in Stourbridge and consisted of black enameling generally on white opaque glass around 1850.

facet. A facet is a surface area which has been ground to a flat (or sometimes concave) surface to look like the face of a gemstone.

facet cut stem. Faceting was also applied to the stems of glasses as a decoration.

a la facon de Venise. This means in the Venetian style. It was used to describe very high quality and fine glass. The glass was not necessarily made in Venice. It might also include delicate latticino effects. It was produced throughout Europe in the 17th and 18th Centuries.

Farquharson, William 'Clyne'. Farquharson was responsible for contemporary cut glass designs at John Walsh Walsh between 1924 and 1951. It is highly collected and has clean simple designs, including leaf and geometric patterns.

Favrile glass. Generally applied to iridescent glass made by Tiffany. It came in a whole variety of colours and styles. It was produced by metallic salts being sprayed onto the hot molten glass. The name was registered in 1894.

Fazzoletto. This is the name given to the handkerchief vases designed by Bianconi in the 1950's at Venini. The top of the vases are ragged as though the corners of a handkerchief have been pulled upwards. They are hand made and can be striped, or have latticino effects or be simply one colour on the inside and a different colour on the outside. They require a lot of skill to produce and are very fine. They have a smooth flat base. (They are very different to the 'rigid' handkerchief vases produced by Chance). The design has been widely copied but they are rarely as good as the original.

Fenton. This is a glass house working from 1905 to the present day, in Williamstown in West Virginia, USA. Fenton is most remembered for its pressed glass, its carnival glass and hobnail patterned pressed glass. It still produces art glass today. The art glass production is quite varied in design and quality. It includes attractive feather like decoration which appears combed as well as enamelling and some Tiffany like styles.

Feure, Georges de. He was a painter and artist. He designed watercolour illustrations for books and designed furniture. He exhibited at the Bing pavillion in 1900 (see Art Nouveau). He designed some tableware and three pieces of glass. The first is a jug, in muted colours, the next was a vase with Hellenic dancers on the outside which was used as a fancy container for sweets by Fauchon, in Paris. The third was another vase, again, with Hellenic figures. All three date from around 1910. He moved onto the Art Deco style and went onto design theatre costumes. He is respected for his range of designs and media.

filigree. The Italian term is filigrana. This refers to a type of decoration formed by a pattern of threads of glass within clear glass, see vetro a retorti, vetro a reticello, vetro a fili and latticino. This filigrana style was developed by the Venetians in the 16th Century.

finger bowl. This is a small bowl, used to wash fingers between courses at dinner. The bowls are usually made of glass, sometimes clear sometimes coloured and sometimes decorated. Usually they are round, either a tumbler shape or a bowl shape.

fire polishing. This is a process where the glass is held close to the entrance of the glory hole, in order to give the surface of the glass a high shine. It melted out dull spots, irregularities and mould lines on the surface. It was used from about 1834, when it was applied to moulded glass.

firestone. This was a type of glass produced by Richardson. It was opalescent and had festoons of colour. It was made around 1905.

firing glass. This is a toastmasters glass. The glass is thick, so that the volume of alcohol that the glass can hold is small. This prevents the toastmaster from getting too drunk. The foot is normally very thick too, because the glass was banged on the table for the toast. Originally used during the 18th and 19th Century.

flashed. This is glass which has been covered in a very thin layer of coloured glass. This can be done by dipping the body of the glass in molten glass. Chemical flashing is also achieved by placing the glass in contact with heated gases.

float glass. This was invented by Pilkington in 1959. This is a continuous length of flat glass (as in the production of cloth) and was a revolutionary production method for commercial glass. The glass moves on the top of the surface of molten tin.

Flygsfors. A Swedish glass house founded in 1888. It was bought out Orrefors in the 1970's. It was closed by the end of the decade. Art glass production began in the late 1940's. Free flowing organic forms in the Scandanavian manner were produced from heavy coloured glass encapsulated in clear glass (Coquille - 1950's onward). Berndt designed quirky primitive figures which are desirable (1960's).

folded foot. This is the foot of a drinking glass which has been folded underneath the foot. Some continental glasses have the foot folded over the top of the foot. The fold was to increase stability and reduce breakage. It was used 1685-1750, although it has been revived from time to time.

Fostoria. Founded in 1887 it has a complex chequered history, moving site and changing ownership. The production was always interesting and varied. Pressed glass or mould blown glass was its staple production. Highly controlled patterns such as Homespun and Needlepoint are desirable and require some skill to produce. The glassworks revived styles from time to time. Unfortunately economic pressures forced it to sell up and it was eventually closed in the mid 1980's.

Franckhauser, Etienne. Franckhauser was a pressed glass mould maker from France. He supplied moulds to Jobling, Sabino, Hunnebelle and Lalique in the 1930's.

free blown. Another name for hand-blown and shaped by hand tools.

frigger. Decorative novelties, made by the glass workers, at the end of the day, with the remains of the pot. They made them for their own amusement and use, and also sold them independently of the glass house. The use of the remains of the batch was a perk for the workers.

frit. Ingredients which are to be added to glass, but first have been ground to a powder.

Fritsche, Wilhelm. Fritsche is considered to have been one of the best glass engravers. He originated in Bohemia, and worked at Thomas Webb from the 1870's. He produced cut crystal with panels of scenes, floral baskets and his work is characterised by the exquiste detail. He decorated extraordinary pieces of rock crystal. Examination of the body of his work suggests that he should rank as one of the key names in glass history. See mark.

frog. A glass block with holes, in which to hold flowers. Frogs are usually placed inside a bowl or vase and help arrange the flowers in an exact position.

frosted glass. Frosted glass has a matt surface finish, which is produced either by the use of acid, sandblasting or grinding. 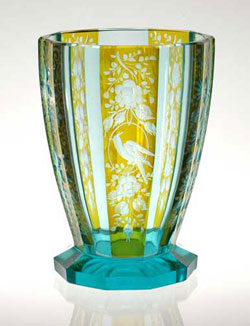 An iridescent Loetz vase etched through to a mottled amber glass.
A panelled amber flashed and cut Bohemian glass vase with a pale blue foot. 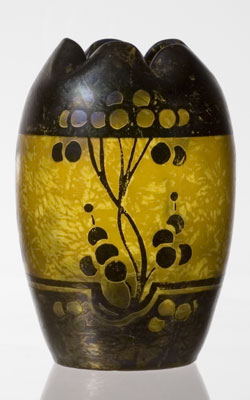 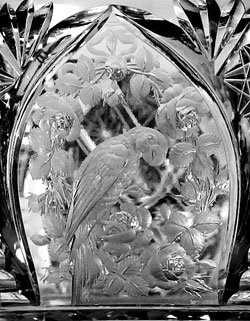 A close view of a Wilhelm Fritsche engraved panel circa 1878 for Thomas Webb & Sons. 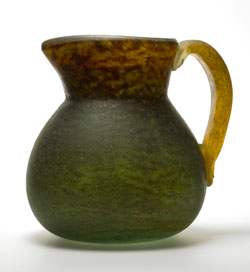 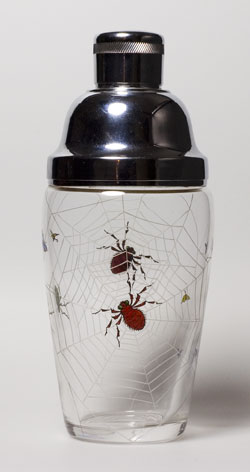 A classic example of deco enamel and simple cutting. A cocktail shaker by Stuart and Sons (1935) 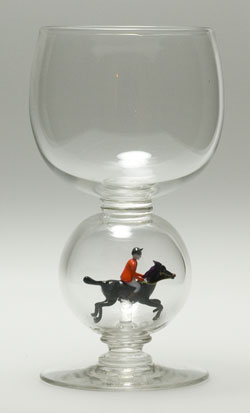