D E to F G
Gadget. A tool used for holding the foot of a glass. Originally this left marks on the base (Y or T shape). There is no need to attach a pontil so this mark is normally absent unless more decoration is added. The tool was introduced around 1860. Later the tool used asbestos pads leaving no mark.

Galle. Emile Galle (1846-1904) was a major creative force in the Art Nouveau movement. He trained in Botany which would later influence the glass he produced. He began producing enamelled glassware mostly on clear glass in the 1870's. Designs influenced by classic ceramic forms. Natural themes, insects and flowers, began to figure in Galle's work. Cameo production, for which Galle was to become famous, was instigated following exhibitions in Paris containing English cameo glass. This style, coupled with the naturalistic themes of the Art Nouveau movement, became incredibly popular. His interest in enamels continued with pieces with Iznik and Persian influences. Cameo was originally made by Christian at Burgun Schverrer and Cie, but production had to be expanded to meet demand. In 1894 Galle opened a new factory at Nancy and glass was produced by several in-house designers, all pieces still bore the Galle signature. Galle produced a wide range of creative innovative glass but much of the factory production was simplified ('application industrielles') for larger scale production. Galle died in 1904 and the factory was run by his widow and Victor Prouve, an influential designer. Prouve introduced some modernity. After the First World War cameo production continued but never caught the spirit of the new age and became unpopular. Production ceased in 1936.

Gather. The blob of hot glass (metal) attached or 'gathered' onto the end of the blow-pipe. Sometimes called a gob. Occasionally it is used to refer to the process of adding another layer of glass over an existing blob.

Gerbruder Pallme Konig and Habel. This glassworks was formed in 1889 by merging the Palme-Konig glassworks (Kamenicky Senov) with another factory owned by Wilhelm Habel (Elizabeth-hutte in Kostany). It produced relatively high quality glass (frequently mis-attributed). Amongst the range were patterns of glass trails wound around iridescent glass. These were then reheated and placed in a mould to form the shape and to partially submerge the threads into the surface. This method of production means that pontil marks are rarely observed on the glass unless other additions or additional manipulation is required. The forms tend to work with the media rather than controlling it. A great variety of shapes and colours were produced. So as well as the commonly attributed green vase with melted threads a whole range of forms and colour were produced. Attribution is still very difficult. A good book needs to written and is complicated by the fact that the glass is never signed and some superb reproductions exist. See mark.

Gilding. The application of gold-leaf mixed in oil followed by firing in a low temperature kiln.

Glass. A rigid material with a non-crystalline structure but with a short range structural order not disimilar to a liquid. Glasses can be atomic, colloidal or molecular mixes of material. The glass discussed here is formed dominantly from silica (sand) with soda, potash, and/or lead oxide. These are heated and melt together to form a molten malleable blend. The blend and treatment determine the glass properties. There is a great deal of debate as to whether glass is truly solid or liquid. At all practical timescales at room temperature it appears solid like. A modern myth suggests medievel stained glass flows when mounted vertically. This hypothesis stems from the observation that stained glass window fragments are thicker at the bottom that the top. However it is highly impausible the glass could have flowed under its own weight over such a comparatively short time. Windows were assembled from crown glass which has a graded thickness due to its mode of manufacture. It is likely a window was assembled with the thickest glass to the bottom.

Glory Hole. The mouth of the furnace where the glass gather is heated. In large glass furnaces the glass stock is stored and kept workable in heated pots. In small sudio furnaces this can be a stand alone furnace.

Goebel Porzellanfabrik, W. A German ceramics manufacturer that was associated with the production glass figurative pieces.

Goldberg, Carl. He founded his own workshops in Haida in 1881. Expanded and by 1895 had 200 skilled staff. Produced cut glass, engraved tableware, iridescent glass, with silver overlay strong similarity to Loetz.

Goofus. Commonly used generic term for pressed glass made between 1900 and early 1920's which was brightly painted particularly in silver and gold. The style was produced by Indiana, Northwood, Dugan, Imperial, Crescent and other US glass houses. Varies enormously in quality and design.

Goupy, Marcel. French designer of enamelled glass and tableware. Worked with Heiligenstein who produced many of his designs. A wide range of both decorative and figurative forms in enamel in a strong Art Deco style between 1918 and 1936. Enamelling can be light or heavy and sometimes outlined in gold. Goupy also designed matching tableware and glass.

Graal. A complex and demanding technique developed by Orrefors and exploited by Hald and Gate following the First World War. The technique is still in use today by a number of glass houses. It is based on a cameo technique. A cased glass core is cut in some form with a pattern as a cameo vessel would be produced. This is reheated and is further cased and then blown to its final form. There are variations on this form including using an airtrap method (termed Ariel). Early examples of these glass forms are highly sought after.

Graffito. The application of metal leaf (normally gold) to the glass surface which is then scratched through in places to leave a pattern. Simliar process to Scraffito through a glaze in ceramics.

Gral-Glas. A German glass house set-up in the 1930's. Modernist designs with clean lines very much in the Scandinavian style. Closed in the 1990's.

Gray-Stan. It is a great shame, considering their production quality, that this glassworks only remained in business for 10 years between 1926-36. It takes its name from Elizabeth Graydon-Stannus who founded and ran the works. The main design inspiration came from Noel Billinghurst. Early in the production Irish cut glass forms were imitated. Venetian styles were used as an inspiration for clear glass forms which were sometimes decorated with trails and applications. Gray-Stan is best known for coloured glass formed by marvering coloured enamels and then casing these. Sometimes signed and fake signatures are known to exist. See mark.

Greener. One of the big three Victorian pressed glass makers (Sowerby and Davidson are the other two). Produced good quality tableware, commemoratives and decorative items from the 1860's onwards. Later to re-invent itself as Jobling. See mark.

Gregory Glass, Mary. The name refers to glass decorated with white enamelled figures, usually children. A great deal of this glass came from Bohemia. It is still in production. Mary Gregory is no longer believed to be connected in any significant way with this glassware.

Grotesque. A decorative form of glassware from Steuben consisting of folds of glass not unlike fazzoletto but with more angular folds. Typically made in the shape of bowls and vases. Similar designs from Stevens and Williams.

ground. The name given to the background in a paperweight.

Gullaskruf. A Swedish glasshouse which began decorative glass production in 1927. Free blown glass and pressed glass production. Much of the glass was designed by Gehlin until the mid 1950's. Art Glass and tableware produced, much well designed. Closed by Orrefors in 1983. See mark. 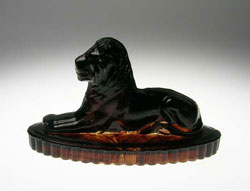 Attributed to Gerbruder Pallme Konig and Habel. A red trailled, scissor cut and heat treated vase. Dates to the turn of the 19th century
Greener mould of a Glass Lion produced by Jobling in Tortoiseshell. 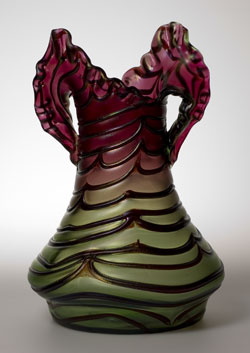 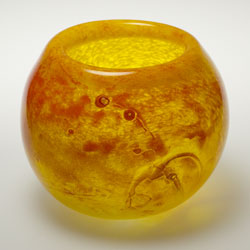 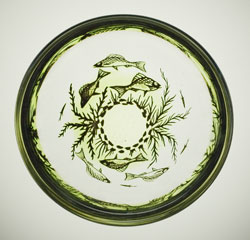 A typical example of 'application industrielles' from Galle made after his death. Such glass is marked with an * between 1904-1914.