H I J - K L M
Hadelands Glasverk. This is a very old glass house in Norway. It was founded in 1762, when it made bottles, then in 1850 it began to make tableware. The quality, design and production techniques developed, and in 1911 it produced Art Nouveau cameo glass. From then on it began to develop more artistic and designer ware. Every year a designer from Sweden is invited to design an engraved wine glass. A glasshouse that has recieved less attention than it deserves.

Hald, Edward. A Swedish designer, who has designed pottery and painted. He worked for Orrefors and worked with Simon Gate on cased glass particularly graal.

Handle. Sometimes the production process of handles is used to date pieces of glass. It is a rough rule of thumb, that handles before 1860 were applied from the top first.

Harcourt. A popular design by Baccarat since 1842. The drinking glasses have a hexagonal foot and stem and six facets on the bowl. If it is gilded it is called Empire.

Harland Glass. Scottish glass house in Wick. It only operated for five years from 1970 to 1975. It was run by Paul Ysart. William Manson also worked at Harland.

Harrachov. This is a glass house in Bohemia. It was founded in 1630. It made tableware and ornamental glass in the 18th and 19th Centuries. It was acquired by the Counts of Harrach in 1798. They also produced cut glass, engraved glass, sulphides, Uranium glass, black and red hyalith glass, lithyaline glass and Venetian style glass. It produced glass for Lobmeyr and other glass houses. At the start of the 20th century it began to make Art Nouveau glass, including designs by Alphonse Mucha. They also produced cameo glass, iridescent glass and silver decorated glass. They also made trailed glass with tears. In the 1950's it made modernist pieces. Today they produce high quality hand made tableware.

Harris, Jonathan, Timothy and Michael. Jonathan and Timothy are the sons of Michael Harris. Michael Harris founded Mdina glass in 1969, and in 1973 he founded Isle of Wight Glass. Timothy continues the Isle of Wight glass with its iridescent and very stylish swirling patterned items. Cameo glass has been added to the repertoire. Jonathan left Isle of Wight Glass an independent glass designer of international repute, creating works of art, including graal, and very special cameo pieces, some of which are reheated to create a glossy finish. All three designers are highly collectable.

Hawkes, Thomas. This was also known as the Dudley Flint Glass Works, and operated between 1770 and 1842. It produced tableware, lighting, chandeliers, and gilded and opaline glass. William Haden Richardson was a designer there. When the company closed the materials were sold to Richardson.

Heat treated glass. This termed is used somewhat loosely but generally refers to glass that has undergone a colour change when portions of it are selectively reheated.

Heckert, Fritz. Heckert established the Petersdorf glass works in 1866, and produced German, Indian and Persian inspired enamelled glass. A Bohemian glass enameller working 1866-1890, his son-in-law ran the glass works from 1890, and then his son from 1910. After 1898, they produced Jugendstil inspired decorations and shapes. They also produced silver overlay glass. It survives today under the name Graf Schaffgotsch'sche Josephinenhutte GMBH. See mark.

Heiligenstein, Auguste. Heiligenstein was to become a very important enamel decorator. He was born near Paris, and first worked for Legras, and then later for Baccarat in 1907 where he was a decorator. He then designed posters until the 1st World War interrupted his career. He was awarded the Legion of Honour. After the war he worked under Marcel Goupy, where he produced enamelled glass to the design of Goupy. He eventually struck out on his own, and earned commissions from wealthy patrons. He also worked for Leune and Pantin during his complicated career. His work is usually enamelled all over, the many colours of enamel with geometric backgrounds. He used many classical themes and his work is rich. He produced vases, bowls, glasses, pendants, perfume bottles, lidded boxes, and even worked in ceramics.

Heppell & Co. This was a pressed glass works in Newcastle, which only produced glass for a very short time, 1874 to 1885. Davidson bought the moulds in 1885. Their glass is good quality. There are two Heppell icons; a jug in the shape of a fish and a coal wagon.

Heron Glass. This is a glass works in Cumbria, UK, which produces paperweights and giftware, in coloured and lustred surfaces. Production quality is very good, the iridescence is bright and often found on art nouveau reproductons. Collectable in its own right, currently under valued.

Hlava, Pavel. This is a glass designer and artist from Czechoslovakia, he engraved and cut glass

Hobbs, Brockunier and Co. A glass company in West Virginia, working between 1863 and 1891. It produced pressed glass, amberina, paperweights and opalescent glass.

Hodgetts, Joshua. Hodgetts worked at Stevens and Williams. He was a superb intaglio engraver and made cameo with Northwood.

Hoffman, Josef. Josef Hoffman was a founder member of the Wiener Werkstatte. He applied himself not just to architectural endeavours, but also designed Broncit glass which was produced by Lobmeyr. He designed for Loetz, particularly highly geometric cameo forms. It is difficult to characterise Hoffman's work for Loetz since it covered studio glass forms as well as iridescent glassware.

Holmegaard Glassworks. This is a Danish glass works, which has been in operation since 1825. In 1975 it was bought by the Royal Copenhagen group, and renamed accordingly. It had and still has some of the best Scandinavian glass design. Per Lutken worked there between 1942 and 1998, and designed the Beak vases, which were originally called Duckling. See mark.

Hopea, Saara. Finnish design really took off during the 1950's. Saara Hopea worked for Kaj Franck at Nuutajarvi from 1952 to 1959. She was very talented. She produced simple and strong glass in bold colours. One of her trade marks was the combination of clear and coloured glass with bubbles trapped between to create unusual effects. One of her classics was a design called the Panther vase or Vase Pantteri. It is a clear thick walled glass vase, with airtraps and either green or purple spots of colour. Saara Hopea won a silver medal at the Milan Triennales for her stacking tumblers in 1954. They were in production until 1968. She won another silver medal there in 1957. She also worked at Arabia with Kaj Franck at the same time (1952 to 1959) designing ceramics. She made a startling hors-d'oeuvres tray with multiple bowls joined delicately together in a black glaze. She married the enamellist Oppi Untracht in 1960 and moved to America. Although her family were already involved in the silver business, it is generally considered that she learnt and developed her enamelling from her husband. Her enamelled pieces of work were sold through shops such as Potter and Mellen Inc and retail outlets for Georg Jensen. She overlapped transparent layers of colour over one another and created wonderful coloured bowls. During 1963 to 1965 she and her husband travelled in Nepal and later moved back to Finland in 1967 where she continued enamelling. She died in 1984. Her husband published a book about her life and work in 1988. A truly remarkable designer, with all this plus designs in jewellery, textiles, lighting and furniture as well. See mark.

Hunnebelle, Andre. This was a glass works, whose artistic and table glass ware was sold on the Champs Elysees in Paris. It operated at the end of the 19th Century and into the start of the 20th Century. It was reflective of the Lalique style, but the designs were more deeply moulded, and more geometric. He eventually became a film director.

hyacinth vase. A vase with a cup shaped bowl at the top. The base is filled with water and a bulb is placed in the cup. The roots of the bulb dip into the water and the bulb grows. This, as the name suggests, is normally used for hyacinths.

Hydmann-Vallien, Ulrica. A great glass designer from Sweden. She worked at Afors in 1963, then Kosta Boda in the seventies. She is also famous for her ceramic design for Rorstrand. She has illustrated books, produces paintings and textiles. The designs are primitive and strong. See mark.

Hydrofluoric acid. Often shortened to HF, it is used to dissolve silica and thus dissolves glass. It is stored in plastic bottles! It is used to etch glass as a concentrate. Acid polishing is achieved from a sulphuric acid and HF blend to leave a glossy surface on lead glass. With ammonia, it produces a frosted finish. 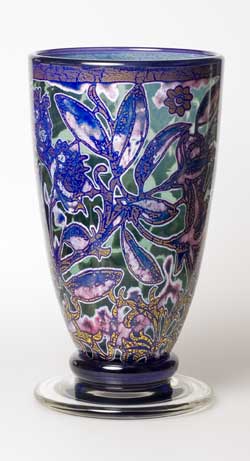 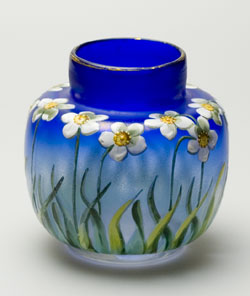 Holmegaard Wave vase by Per Lutken (1962) 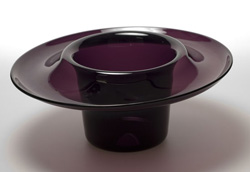