Iittala Glassworks. A Finnish glassworks that became synonymous with 20th century modernist design. Originally formed from two glassworks Karhula and Iittala in 1915. Alvar Aalto, the Finish architect, won a design competition in the mid 1930's and in 1937 the Savoy vase went into production and has been produced ever since. After the Second World War mechanised production was progressivley concentrated at Karhula and Iittala became a major force in art glass production. The trend started by Gunnel Nyman towards reduced, stylised forms was continued. Initially Kaj Franck and then Timo Sarpaneva and Tappio Wirkkala transformed the output, embodying bold modernist designs which extended to tableware. Wirkkala's first design was a large mushroom like form (Kantarelli - Chanterelle) which is now highly desirable. Sarpaneva produced a bark like surface on clear glass from a wooden mould on the Finlandia range in 1964, an icon of the 1960's. A method later copied and famously developed by Baxter for Whitefriars. It is still an innovative producer. It joined Nuutajarvi in 1988 to become Iittala - Nuutajarvi. It has followed the path of many old glassworks and in the late 20th century it became part of a larger conglomerate selling tableware and other decorative items. The amalgamation of Karhula with another glass works Riihimaki in 1988 was less positive leading to the closure of Riihimaki and the machine glass production of Karhula was sold to US ownership.

imitation stoneware.There are numerous of examples of glass imitating semi-precious stones such as agate, chalcedony, jade, jasper, marble, onyx, malachite, lapis lazuli... Although numerous glass houses used their own descriptions for their glass effects the terms used by Stevens and Williams, Steuben, Webb and glass houses of Bohemia are taken as reference points for particlular forms. They vary enormously from vase to vase, each piece being unique, making attribution difficult. The exception being Stevens and Williams where their form of moss agate has never been bettered for delicacy. The forms include,

(1) Agate glass - Glass of several colours are partially blended to produce the appearance of semi precious stones. The Venetian term for this type of glass is Calcedonio.

(2) Agate glass - This was developed by Tiffany. Striations of different colours are produced by partial blending of the glass in the pot. Items blown from this mix would retain the striations.

(3) Moss Agate - A technique developed at Stevens and Williams by John Northwood where a paraison of soda glass is encased in lead glass and then lightly marvered with selected powdered colours. After the shape is formed the soda glass core is flushed with cold water to produce a crackle glass inner surface this is further reheated to fuse the crackles together. Moss Agate was made by Carder at Steuben but surprisingly Carder never achieved the delicacy of those of Stevens and Williams.

(7) Jade - A term used to describe green glass in imitation of Jade. Used by a number of glass houses. Arguably Steuben produced the most subtle interpretation.

(8) Hyalith - A deep red or black agate like glass produced in Bohemia from the start of the 19th century. Very similar to (9) in form. Up to 1820 it is thought that von Buquoy held a monoply on this form of glass.

(9) Lithyalin - A marbled opaque glass, typically red, produced in Bohemia patented by Egermann. Variations on this have been in production since the late 1820's although it was less popular towards the end of the 19th century.

Imperial Glass Company. A US glass company found in 1901. Continuous mass production of moulded tableware and better quality batch produced pressed glass under the Nucut brand. The latter imitated heavy cut glass. Carnival glass was introduced in 1909 in a wide range of styles and Imperial became a major producer of this form of glass. Perhaps the most interesting and sought after glass was their art glass production which began in 1916. Initially the production was a combination of pressed and hand worked forms with a soft iridescent surface finish. The styles taking inspiration from Bohemian, Steuben and Tiffany art glass production. By the mid-1920's free blown art glass was being produced in a range of colours, with iridescent finishes, some high lustres, inclusions, trails and knops. Clear glass with coloured trails were made. Cheaper mould blown glass along similar lines to the iridescent art glass was introduced. This included a melted trail pattern called King Tut, a term occasionally used generically in the US for tightly trailed glass. There was also a line of simply formed iridescent glass named by collectors stretch glass produced by a number of glasshouses. Only the latter range was financially succesful. Imperial went bankrupt in 1931 suffering from the results of the depression. It re-emerged producing pressed tableware with some success. In 1949, Milk glass, an opaque white glass was introduced. This was produced in retro styles and some carnival glass was re-introduced. After a series of ownership changes Imperial went bankrupt and was closed in 1982.

Incalmo. Two separately blown pieces of glass are brought together. One is usually formed into the shape, say a bowl or vase, the other is joined to it whilst still on the blowing iron. It is then cut with shears and the two forms brought together. Sometimes the forms are totally matched. It is also often used for layering one colour on to another but can be used for encapsulating a variety of effects and inclusions.

Inclusions. A generic term for encapsulated, normally decorative elements, in the body of an object. These include canes or metal particles and is sometimes used to include trapped air bubbles.

intaglio. A form of deep cutting used to produce a design or image with a 3-dimensional effect. Originally stone wheels were used to rough out the depth and design. Then finer cutting and engraving (typically copper wheel) was used to develop the finished form.

intarsia. A glass style developed by Carder at Steuben. The eventual form consisted of a clear layer cased by an etched coloured layer. Various patterns or stylised floral themes were used. This was then cased by another clear layer. (see Loetz).

intercalaire. inclusions or any decoration trapped between two glass layers.

Inwald, Josef. A large glass company incorporating, amongst others, a number of old Bohemian glass factoires. Produces under its own name. At the turn of the century it produced good quality art glass. It produced carnival glass in the 1920's with a bright orange gold sheen. Also produces cut glass and table glass. Owned Gerbruder Pallme Konig and Habel.

iridescent. This is a rainbow like effect due to the diffraction and/or absorption of white light. It first recieved wide spread attention in the mid 1800's when archeological finds of Roman glass displayed this effect. This was due to corrosion of glass buried in the ground and also the structure of the glass. Similar diffraction effects are seen in opals. It was mimicked by the use of metal salts in a reducing atmosphere to produce bright colours characterising the electronic structure of the species that were used. There is some debate over the originator of the finishes although commercial production was known as early as 1863 by Lobmeyr. Subsequently, Tiffany, Steuben, Loetz, Webb, Stevens and Williams and a host of Bohemian glass makers have produced iridescent styles. The wide variety of effects has resulted.

Isle of Wight Glass. see Harris, Jonathan, Timothy and Michael. A small glassworks that had its origins in Mdina glass set up on Malta by Michael Harris. There have been two new works set up from this first enterprise, Mtarfa and Phoenicia. Michael returned to the UK to found the new operation. The early glass bears a resemblence to Mdina although the production method varied. Isle of Wight glass utilised inclusions, foil and marvering techniques and is generally more finely blown. Iridescent and coloured glass was developed and Michael's wife Elizabeth also began to the design. On Michael's death in 1994 the design responsibility was shared. Isle of Wight is one of those rare glass houses which year on year changed ranges, techniques and designs. Highly collectable. 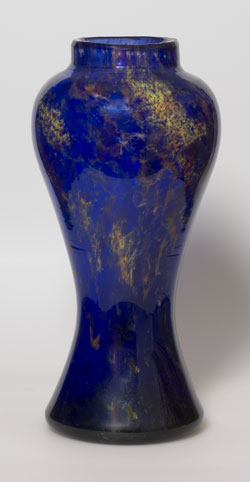 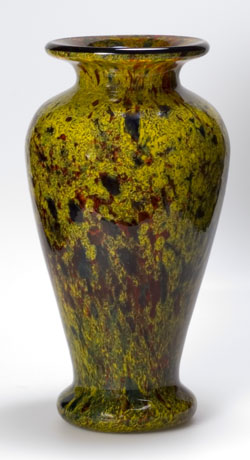 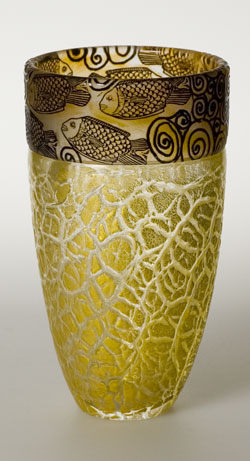 Isle of Wight vase including a cameo band with gold on crackle glass. Early 21st century. 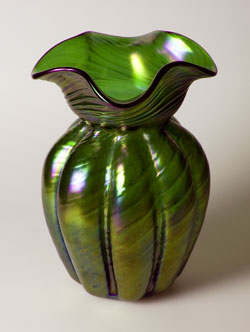 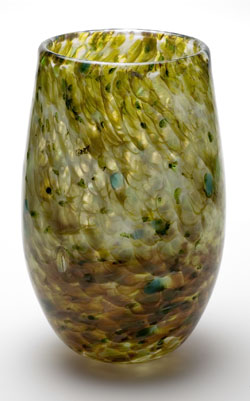 The odd bubble, Aventurine, and three colours of glass inclusions in a vase The Pembroke Glassblowing Studio, Wales. (2005)