H I J - K L M
Jack. A tool best described as a giant pair of tweezers which has been used for many purposes including manipulating and opening the internal form of the glass whilst still plastic. Used sometimes to form the area for the break point between the glass and its attachment point.

Jack in the Pulpit. This refers to a particular shape of vase. The vase itself can be tall and slender or short and squat. The main design feature is the wide lip, which is pulled up at the back and pulled down at the front. Whilst this form has been used for many centuries, it was Tiffany who gave it the name of Jack in the Pulpit. This is the name of an American wild flower which also has this form.

Jacobite glass. Glasses which were engraved with sympathetic symbols and words to the cause of Bonnie Prince Charlie. James II was exiled along with his sons James (the Old Pretender) and Charles (the Young Pretender). Bonnie Prince Charlie (Charles) was defeated in battle in Scotland at Culloden in 1746. Up to 1745 the theme of the engraving was the English Rose, and the mottoes 'Fiat' which means Let it be done, or 'Redeat' which means May he return or 'Audentior Ibo' meaning I will go boldly. These glasses were usually used in secret for Jacobite toasts. After 1770, there was no need for secrecy as the cause was lost. The glasses were continued to be made until a little after 1770.

Jacobs, Issac and Lazarus. Lazarus was the father of Issac. Lazarus founded Temple Street glass works in Bristol. It is thought that Michael Edkins gilded some of his glass there between 1785 and 1787. Issac worked for his father and opened his own glass works the Non-Such Flint Glass Manufactory also at Bristol. He became a very important decorator and was glass-maker to George III. He was highly skilled in the art of gilding and gilded many decanters, glasses and finger bowls in blue glass. Exceptionally rare outside the British Royal family and Bristol Museum!

Jobling. This was a glass works in Sunderland. It started first in 1858 as Angus and Greener, eventually named Greener in 1885 and then renamed Jobling in 1921. Jobling made Pyrex and pressed glass. They made Opalique glass which was similar to the opalescent pressed glass made by Lalique. They also produced satin glass, which was pressed glass with a matt finish. Most often the glass was in soft translucent colours of blue, green, brown or yellow. They also produced a jade pressed glass. They made vases, candlesticks, bowls, jars, dressing table sets, flower rings and posy bowls and much more. It was taken over by Corning in 1940.

Josephinenhutte. Originally a glass works based in Karstal, Silesia in Poland and Schreiberhau (which was formerly in Germany but is now in Poland). In 1923 it merged with Heckert. They produced glasses, table and art glass and iridescent glass. It is now based in Germany and named Graf Schaffgottsch'sche Josephinenhutte.

Karhula. This was a glassworks in Finland, founded in 1899. It merged with Iittala in 1915.

King's Lynn Glass. Between 1951 and 1964 Ronald Stennett-Wilson had worked at Wuidart in London, which was an importer of glass and an agent for Orrefors. Stennett-Wilson also designed glass which was made in Sweden. He eventually set up his own glass works at King's Lynn in 1966. The style was modern and clean. In 1968 King's Lynn was bought by Wedgwood, and the name changed to Wedgwood Glass. Stennet-Wilson continued to manage and design at King's Lynn. He designed vases and glass birds with elongated tails, animals, fishes and mushrooms with splashes of colour in the glass. In the 1980's Wedgwood had a fifty percent stake in Dartington Glass, and designs by Frank Thrower from Dartington were produced. Thrower had also been at Wuidart with Stennet-Wilson. In 1998 Wedgwood was bought by Caithness, and eventually the King's Lynn factory closed in 1992.

Kirschner, Maria. A Czech glass designer from Prague. Kirschner designed for Loetz between 1897 and 1914.

Knight, Laura. Knight was an important painter, and was elected to the Royal Academy. She was a war artist and was to cover the Nuremberg war crimes trial. During the 1930's she is reputed to have designed enamelled glass ware for Stuart with jazzy dancers and circus artists as motifs.

knop. This is used to describe a decorative bulge in the stem of a glass or tazza. Forms are representative of their descriptive names. Typical names are acorn, ball, bobbin, button, cylinder, drop, dumb-bell, hollow, and winged.

Kny, Frederick Englebert. Kny was a glass engraver from Bohemia. He worked at Powell and then at Webb between 1860 and 1896. His sons Ludwig, Harry and William also worked at Webb. Frederick Kny was known for his engraving in rock crystal and intaglio.

Koepping, Karl. Koepping studied Chemistry before then studying at the Munich Academy of Arts. He undertook etching and engraving of old masters, and was published in Pan magazine. He also collected Japanese art and this was sure to influence his style. In 1895, he began to design very fine and sinuous glass, many in the form of a flower with slender stems and curling foliage. He employed Zitzmann in Berlin to produce his designs. They eventually quarreled and Koepping used another glass maker to produce his designs, and he started to sign all his work because Zitzmann was now producing similar glass. Koepping glass is incredibly fragile and rare.

Kosta Glasbruk. Kosta was founded in 1742 by Koskall and Stael. It orginally made crown glass for windows, chandeliers and glasses. At the end of the 19th century, Kosta began to develop cameo glass in the Art Nouveau style with a low relief. Included amongst the famous designers at this time, were Kai Nielsen and Karl Lindeberg whose designs incorporated Swedish flowers. He was head of the engraving workshop between 1907 and 1931. Elis Bergh was employed in 1929 as the new art director, and the designs took on a modern feel, with clear glass with simple cut designs. In 1950 Vicke Linstrand became art director and a very wide range of designs were produced. Other famous artists at Kosta include Gunnel Sahlin (fruitteria), Edvard Stromberg and Goran Warff. Kosta, Afors, Boda and Johnsfors became part of the Afors group in 1971. Skruf and Maleras joined the group in 1977 and the name Kosta Boda was used. In 1990 they merged with Orrefors to form Kosta Boda Orrefors and since 1997 they have been part of Royal Scandinavia. See mark.

Kotera, Jan. Kotera was an architect and glass designer from Prague. He worked for Harrach between 1904 and 1910. His designs pre-empted Art Deco designs by 30 years.

Kraka. This is a type of art glass which was designed by Sven Palmqvist whilst at Orrefors. It was made between 1944 and 1972. It consists of an enclosed network of glass between two layers of glass.

Kralik & Sohne, Wilhelm. (Not to be confused with Kralik & Co Glasshutte in Germany). Wilhelm Kralik was founded in 1881. It made art glass, iridescent glass, trailed glass, peloton glass and glass similar in style to Loetz. It is often stated that the pontil on the Loetz style glass is not polished, but instead finished in a mould. However there are applications on some pieces that required attachments after shaping. These appear with a pontil mark. They also produced glass with a silver overlay. It has been stated that Kralik glass was sold through Bakalowitz and Lobmeyr (both in Vienna) and Tiffany in New York. However this should be viewed with caution as the company was originally formed from a parent company with a similar name which was divided as Kralik and Sohne and Meyr's Neffe. The higher quality production of Art Nouveau glass was made by Meyr's Neffe. This is not to say all Kralik production was derivative, it is simply not well enough understood to be sure of an attribution for the more unusual pieces. Kralik is known for the two patterns; Martelle, an iridescent glass (white and an equivalent in pink) with a network of randomly distributed plate like regions separated by small indented troughs; and a silver and white roughened glass sometimes with overlayed trails. Martelle is frequently seen with applied flowers in green, iridized white or exceptionally other colours. Kralik closed in the Second World War. See mark. 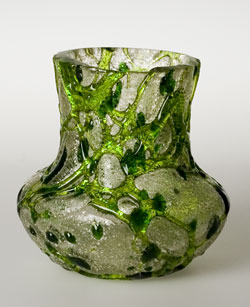 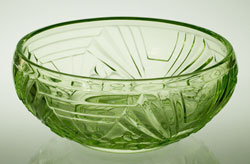 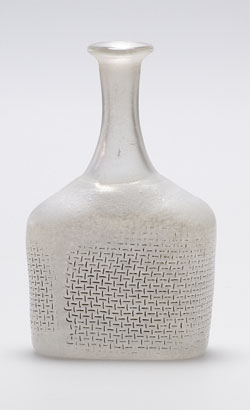 An iridescent vase in a decor of a type used by Kralik and Sohne in the late 19th Century.
Kosta miniature vase by Bertil Vallien