D E to F G
Dammouse, Albert Louis. (1848-1926) A ceramicist from Sevres who produced exceptional quality glass based on variations of pate-de-verre containing a ceramic and powdered glass base. He developed a further variation based on an 'enamel' mixture. Some pieces are incredibly fine, similar to plique-a-jour. His works are innovative and exciting, they are valued and rare. His signature is accompanied by the Sevres S. See mark.

Damon et Delente. Louis Damon was a Paris based glass decorator and retailer. Carved Daum blanks in the Art Nouveau style. He employed Auguste Heiligenstein. Damon formed a partnership with Delente, his brother-in-law. Damon died in 1947, the Paris business continued in operation.

Darmstadt. A glass house with the name Grossherzogliche Hessische Edelglasmanufaktur. Particularly known for iridescent glass by Schneckendorf in the Art Nouveau style. Darmstadt was a creative cultural centre for German Art Nouveau.

Dartington. The Dartington Hall trust founded Dartington glass in 1966 in Torrington in Devon. The chief designer was Frank Thrower for about the first twenty years. Dartington is well known for its delightful clear glass tableware. Less known is its art glass production which though small in output includes some sophisticated pieces. It employed designers from all over the world. Dartington opened a studio glass facility in Plymouth during the early 2000's producing coloured glass with metal inclusions and some graal. See mark.

Daum. The Daum brothers Jean-Louis Auguste (1853-1909) and Jean-Antoinne (1864-1930) took over their fathers glass house in Nancy. Unbelievably skilled and creative pieces were generated as part of the Art Nouveau movement. Cameo glass pieces were produced in a series, typically acid cut, sometimes with added enamel. Nature and landscapes were commonly used themes. Marjorelle, a long time friend of Antoinne produced bronze and wrought iron mounts. A relationship significant to the future of Daum developed when Daum purchased rights to develop pate-de-verre. Along with Henri Berge, Walter developed this technique with technical aide from Daum to produce stunning figurative examples. After the First World War Walter and Berge set up an independent studio. Daum diverted their attention to the new Art Deco designs producing massive glass pieces in clear. Tableware production began in the interwar years. Clear glass dominated production. Michael Daum became chief designer before the Second World War and clear glass production dominated their output. The company turned public in the early 1960's and by 1965 pate-de-verre re-emerged. Techniques mixing crystal and pate-de-verre were developed. Pate-de-verre became their main artistic output. Artists designed for them including Picasso and Dali, and designers such as Starck and Dubreuil. It is still a highly creative glass house. See mark.

Davidson, George. (1822-1891) Davidson founded the glass factory in 1867 in Gateshead. It produced small items of decorative pressed glass in flint and a range of colours including pearline. All are well executed. Sometimes they carry a registration number, sometimes a lion rampant appearing from the top of a castle keep. By the 1920's the company range followed the Art Deco movement producing cloud glass of more modern shapes. This was a two colour poorly mixed blend of light and dark glass. One surface of the blown object is matted by the addition of acid. Colous include, purple, amber, blue, orange and green. There were later variations on these. Chippendale was produced under license and then they acquired the rights in the 1930's. In the 1950's a ripple pattern was introduced which met with some popularity, this was similar to hand blown glass production only less expensive. The production methods were uncompetitve and the firm eventually closed in 1987. See mark.

Decorchement, Francois Emile. (1880-1970) He set up a glass house in Conches in 1902 producing pate-de-verre, statuettes, bowls and vases. He extended this range to encompass a rougher hewn surface with motifs of flowers and insects. His designs became increasingly abstract toward the outbreak of the Second World War. These were executed in pate-de-cristal. After the war production continued although in a more restrained manner with softer semi opaque and translucent colours.

Degue. A French glassworks. It is the name on glass produced by Verrierie d'Art Degue, founded in 1926. Degue was a reduction of the name of the founder David Gueron. The factory produced glass which one might generously describe as an homage to Schneider. Gueron employed ex-Schneider workers and soon over stepped the mark resulting in litigation between Gueron and Schneider. Styles include highly decorative brightly coloured Art Deco designs; all well executed which bear a striking resemblance to Schneider. Daum production was not exempt from his attentions and copies of the modernist glass (inspired by Marinot) were produced. Although guilty of imitating the production of other producers Gueron's production is always of good to high quality. The best pieces are marked Degue. He employed Cazaux who produced original, creative Deco designs in clear, coloured and frosted glass. Interestingly one polygonal shape was very similar in form to the banjo vase of Baxter. The factory was destroyed and Gueron died during the second world war. See mark.

Delatte, Andre. He founded a small glass works in Nancy. Specialised in cameo early on. They were acid etched rather than hand carved or wheel cut. However they are always well proportioned and decoration is well considered. Always signed Delatte. Delatte produced variations on the designs of Daum which resulted in a number of law suits. Innovative pieces were produced including strong Art Deco enamels and deep sand blasted monochrome vases. The latter are marked 'Javril'. Although not unknown it is a relatively under rated glass house. See mark.

Dennis Glassworks. A glasshouse set-up in 1855 by Thomas Webb.

Dewar Flask. The earliest form of a thermos flask. Double walled and silvered developed by James Dewar. Some were produced by Whitefriars.

diamond-faceting. A cut pattern of diamond shapes. A version was produced in pressed glass.

diamond-point. A diamond-point tool is used to engrave a pattern or image by stippling or scratching the surface of the glass.

diatreta. A form of glass made by Steuben using cire perdue to develop a glass fretwork fused to the main body of the piece. (based on a Roman form of the glass.)

dichroic. This term is frequently used incorrectly, even in the scientific literature. Here are two common uses for the term:

(1)Dichroic glass has the appearance of different colours when it is viewed from different angles in white light. There are very early examples of this, for example Chinese glass which in transmitted and reflected light takes different colours.

(2)Dichroic glass is the term applied to glass coated with thin layers of metallic oxides which transmit certain wavelengths of light and reflect others. This causes a sparkling rather than a truly iridescent effect which changes with angle of observation.

dip-mould. A one-piece mould for shaping or patterning a gather of glass.

double gourd. A rare and generally desirable glass vase which consists of one small bulb placed above a larger bulb, symbolic of heaven and earth.

double overlay. Two layers of glass, one encasing the other.

Dresser, Christopher. (1834-1904) An important English designer who worked in a wide range of the decorative arts. He designed the free blown glass range Clutha. This was made by the Scottish glass house James Couper and is normally signed CD. There is some argument as to whether he was involved in the production of the free blown glass of Sowerby. It is more likely that the indirect influence of the Aesthetic and Arts and Crafts movements were as much responsible as any direct intervention by Dresser. However Dresser's influence should not be under estimated and there are strong stylistic links between production in the 1870's and 1880's and the styles of Webb. Glass and silver pieces were designed by Dresser for Hukin and Heath. Dresser like forms were produced by Loetz.

drinking glasses. This refers to English drinking glasses. Up until the mid 16th century, it is believed that almost all glass was imported, certainly for drinking glasses. It was in 1567, that Jean Carre had a licence to make glass for windows, at Crutched Friars in London. He brought over workers from Italy, and developed the facon de venise style of glass and was granted another licence to produce Venetian style glasses. The government imposed a ban on the import of glass for 21 years. The licence was eventually transferred first to Sir Jerome Bowes and then to Sir Robert Mansell. The licence ended sometime in the middle of the 17th century. It was Ravenscroft, who in 1677, was granted a patent for his production of lead glass. It was through this invention that the artistry of cut and engraved glass could begin. This early glass was very heavy, but in 1745 a tax on glass was applied to the weight of the materials used. This was supposed to encourage waste materials to be reused, and thus require less wood as the reused materials have a lower melting point. This meant that wood could be saved for boat building. This encouraged lighter designs of glassware with tears and twists and thinner stems. Between 1715 and 1769 Silesian stems were popular, and between 1745 and 1770 air twists were popular. The tax on glass was increased in 1777, and as free trade with Ireland came input operation in 1780, this encouraged glass makers to move to Ireland. It was not until 1845 that the glass tax was dropped.

Dumoulin, Georges. An art glass maker in the style of Marinot. Started work in glass in the late 1920's. Modernist styles were produced sometimes externally decorated with trails, bubbled pieces, massive pieces, every piece handmade and unique. Critically acclaimed his work became less popular after the stock market crash of the 30's and he ceased work in this field in 1937.

Durand, J.G. This is the largest producer of glass in the world, producing millions of pieces every day. It was founded in France at Arques in 1825. There is also a factory in Bilbao, Spain and in Millville, New Jersey, USA since the 1980's. It also produces heat resistant kitchen ware. Trade names include Arcopal, Arcoflam, Luminarc, Cristal D'Arques and JG Durand. 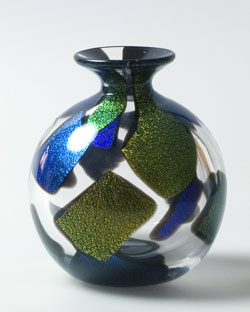 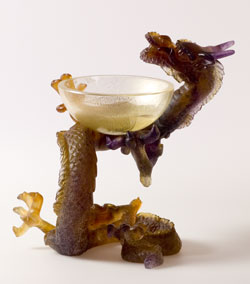 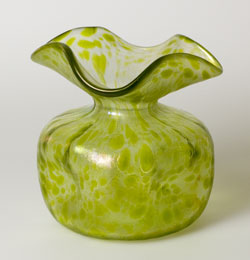 A Loetz glass vase in Papillon showing stylistic influences of Dresser. (Note: It is not necessarily designed by Dresser) 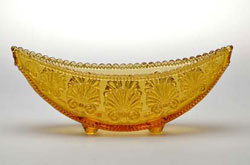 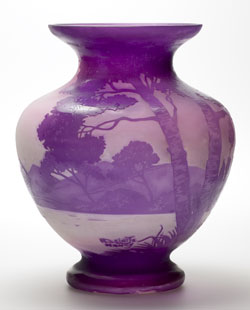 A Dartington Chateau suite glass from the 1980's