tazza. A bowl mounted on a stem and foot.

Teign Valley Glass. This is also known as the House of Marbles. A glass house in Newton Abbot, Great Britain. They make marbles, art glass and tableware.

tesserae. Small pieces of glass (or tiles) which are used to make mosaics

Theresienthal. A company called Krystallglasfabrik Theresienthal began in 1836 near Zwiesel in Bavaria. It provided glassware to Russian and French royalty. It went bankrupt because the original founders withdrew, and from 1845 to 1861 it was run by a bank and in 1861 it was bought by Baron Michael von Poschinger. From then on, they made Venetian and Bohemian style glass. The son of Michael von Poschinger, also Michael, produced some of the designs. At the turn of the century it produced beautiful Art Nouveau glass, and it supplied blanks to the local glass making school for decoration. After the Second World War they produced coloured glass. In 1963 a director of the glass making school, Max Gangkogner, became a co-owner of the factory and in 1973 he purchased the rest of the shares. In 1982 Porzellanfabrik Hutschen-reuther took over the company. However Hutschenreuther collapsed and the glass works was purchased by Ralph Wenzel, and the company was renamed Thereisenthaler Kristallglasmanufaktur. Today it makes Venetian and Bohemian style glass ware - just as it had when the Poschingers first became involved with the glass house. It also produces Jugendstil enamelled glassware. It has collaborated with various designers recently including Paul Driessen, Peter Svarrer, and Wolfgang Stefan producing very modern and dynamic tableware.

Thrower, Frank. British glass designer working at Dartington between 1967 and 1973.

Thuret, Andre. He produced glass similar in style to Marinot. His pieces have bulges and swirls of colour and bubbles. During the 1920's he won several prizes for his glass.

Tiffany. It was Charles Lewis Tiffany that began the firm of Tiffany and Young in 1837. It was to become Tiffany and Co and Charles was known as the King of Diamonds, collecting many of the great jewels from European royalty. Charles was a great entrepreneur, selling Oriental items brought in from the docks, and even the left overs of the First Great Atlantic Cable. This was made into paperweights and bracelets, and the police had to control the crowds who descended on the shop. Tiffany also wanted the best, and encouraged the metal workers and jewelers to produce articles which matched the best in Europe. His son Louis Comfort Tiffany was keen to be an artist. He frequented artist studios and traveled to Europe, Africa, and Palestine. During this time around the 1870's he would have seen some of the great Arts and Crafts pioneers and he would have seen the stained glass windows in many great churches and cathedrals. On his return he experimented, he built his own kilns to produce glass to his own recipe to get the colours he wanted. This met with the growth in religion in America at the time and his stained glass windows were to prove very popular for all the new churches being built. He developed colours and techniques which meant that each piece of glass formed the picture without the addition of enamel or paint on the surface. What was left over would be used to produce lampshades, and soon everyone wanted a Tiffany lamp or a glass window. In 1892 he formed the Tiffany Glass & Decorating Company. He established a glass works at Corona Long Island in 1893, and had Arthur Nash as his vice president. Arthur Nash had come from England from Webb. The Corona works was destroyed by an arsonist and was rebuilt quickly. The public taste at the time preferred iridescent glass and he registered the trade name of Favrile for his iridescent glass. It was derived from Fabrile, which means handmade in old English This was made in many shapes and colours. For these and the lampshades, he worked in the Art Nouveau style, with peacock feathers, dragonflies and flowers influencing his designs. In 1887 the factory at Corona expanded with a foundry to make metal objects and bases. It was at the height of popularity in 1902 that Charles died. Louis took over the running of Tiffany and Co. He further developed enamelled ware, Favrile pottery and jewellery (not a financial success as it was very expensive to make). Glassware at this time was either dark blue or gold iridescent called Tableware, and the other called Display ware with an enormous variety of styles. Styles included Agate, Cypriote (which has a pitted iridescent surface), Lava Glass (which has dribbles of golden glass), Diatreta Glass (a glass body held within a cage made of glass also produced by Steuben), Jack in the Pulpit glass, Goose neck glasses imitating Persian perfume sprinklers, Millefiore glass (glass cane flowers applied within the surface), Paperweight vases (vases encased within a layer of clear glass), cameo, intaglio cut, reticulated glass (which was blown against a wire frame for use on lamp bases), Tel el Amama (which was a turquoise satin glass named after excavated glass in Egypt) and red Samian vases. After the First World War, Art Nouveau style became very unpopular. President Roosevelt ordered that a glass screen at the White House be destroyed. The market was full of cheap mass produced pressed Carnival glass. The factory was closed down in 1928, and A. Douglas Nash bought the Corona glassworks, renaming it A. Douglas Nash Corporation. Louis died in 1933. It was only in the 1950's that the glass of Tiffany was rediscovered. Robert Koch at Yale was researching into some of the rooms that Tiffany had decorated, and he then decided to write a study of Tiffany's work. It was from this that the great revival of interest of Tiffany began. See mark.

toastmaster's glass. This is a glass with a very thick wall, so that the liquid contained in the bowl was less than it looked. This was used by a toastmaster in the 18th and 19th Century to avoid getting too drunk.

Toikka, Oiva. Finnish glass designer who worked at Nuutajarvi until 1975. He was famous for his bird designs. He has worked for Iittala since 1981.

tortoiseshell. Glass which imitates the look of tortoiseshell. This was produced by Davidson in marbled black and amber, and in Germany, the USA and Czechoslovakia.

Toso, Aureliano. Vetri Decorativi Ragionere Aureliano Toso was founded in Murano by Aureliano Toso in 1938. Dino Martens was employed as a designer in 1939 and he was artisitic director between 1944 and 1959. Martens was experimental and daring. Gino Poli became artistic director between 1965 and 1976. He was an architect and he expanded the lighting range as Aureliano Toso had bought Lumenform which was a lighting company.The son of Aureliano, Gianfranco, took over the company in 1979. Today the company specialises in lighting and large scale lighting for public buildings.

Toso, Fratelli. This was based in Murano and began in 1854, by six brothers. It made traditional Venetian style lighting and chandeliers. They also made traditional millefiore and filigrana items, and embraced the Art Nouveau style. In the 1910's, they produced some very modern pieces, with powdered glass used to produce pictures and designs on glass plates. In the 1930's they produced dramatic red and black glass vessels. During the 1940's, they went back to producing traditional items for a while, which were exported to the USA. But during the 1950's the style changed again, into a strong and dramatic Italian style. One example of their production are the Commedia Dell'arte glass figures designed by Pollio Perelda. The company was split in 1979, between Fratelli Toso and Fratelli Toso International. Things went from bad to worse and production stopped at Fratelli Toso in 1980 and Fratelli Toso International was bankrupt two years later. The site was bought by Arnoldo Toso in 1983 and began production in 1987, specialising in lighting.

trailed. Thread or dribble of glass applied to a glass body.

transfer printing. This is a method of decorating a ceramic or glass body with coloured metallic oxides. To do this, a copper plate was prepared with the design, and the ink of the metallic oxide applied to the copper plate. The image was then transfered to paper, and the paper then applied to the glass. The ink was then normally fired by heat. George Bacchus and Son began applying this to glass around 1809, and it was also used by Richardson and on Russian glassware around 1940.

translucent. Used to describe an object that allows light to pass through, but in a diffused manner.

transparent. Used to describe an object that allows light to pass through, and other objects can be seen clearly through it.

twists. This is a type of decoration used in the stems of glasses, by twisting the stem. The stem has either air bubbles or coloured threads within the glass. It began in 1735, and was popular in England from the 1740's to 1760's. Air twists are the one of the earliest twists. The air twist is made by either stretching a rod of glass with a tear in it, or by covering over slits and holes in a rod of glass with a cover of glass and then stretching that. The twists can be made to swirl around each other. Colour twists have spirals of colour. Colour twists were rare in English glasses, and were mainly found in European glasses. An incised twist lies on the outside of the stem. A corkscrew twist refers to twists that swirl in corkscrews shapes around each other. A lace twist is a twist made up of very fine threads. A tape twist is a tape or strip of opaque glass, rather than a thread. Cotton twists refers to any white twist. A tartan twist has many different coloured threads interweaved together. 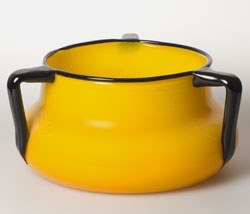 A Loetz Tango bowl in black and orange. In the manner of Powolny, dates from the 1920's. 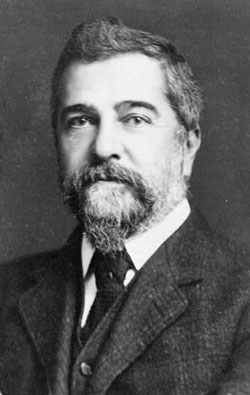 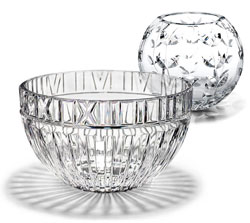 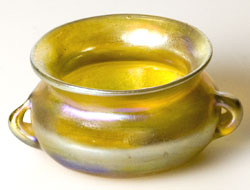 A glass typical of the form of Theresienthal production. Difficult to date although many recent pieces are marked.
Tiffany Favrile salt. 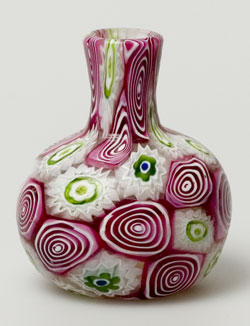